Civilisation in China was the last to develop in the ancient world, about 2000 BC, a thousand years after the Sumerians in Iraq. But it had values ​​of its own: the moral order sustained by virtue, ritual, and reverence for the elderly. 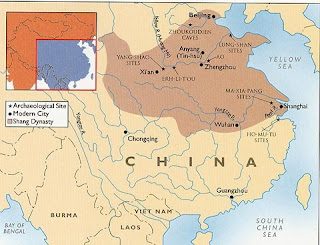 Chinese civilization evolved on the banks of a river, like the Sumerian, Egyptian, and Indian. The Zhang dynasty settled by the river Anyang and called its capital, by the same name. Political power was not based on the control of nature but on that of the past. The last city of the dynasty burned down in 1100 BC. but archaeologists have found the foundations of their civilization: bones. They were bones with inscribed messages, oracles used by the Zhang shamans to communicate with the ancestral spirits. These messages form the beginning of the Chinese wisdom book, Il Ching. It was through the magical power of writing that ancient spirits could be reached. Indeed the word for civilisation in Chinese is "wén" (writing). Chinese civil life was based on the 'written word'.

The second discovery at Anyang was bronzes. Used for sacrifices and ritual meals, their inscriptions tell of the cult of the ancestors and their lineages. It was the possession of these things, the correct following of the rites and the monopoly of bronze and writing that gave access to the wisdom of the ancestors, the basis of political power. As long as the ruler was fair and cared for his people, he had the Mandate of Heaven, the gift of God.

The monumental figure in Chinese history is Confucius. It was he who transformed the magic of the Bronze Age to a conception of the state as a moral order sustained by virtue and rites. He lived in the age of the 'axis' when the Buddha, the pre-Socratics and the Jewish prophets lived. He was not a religious leader but a codifier of Chinese traditions in history, poetry, and ritual. His teachings were the ideals of Chinese governments for two millennia. His message was simple and original: a just and stable society is built with kindness. He insisted that one is not born good, it is something learned, especially by rulers. It was a call to the culture of self-control in a moral society united by respect and trust in others. It was also an anti-authoritarian view because the ideology rested on the scholars, not the emperors who had to submit to the golden rule if they did not want to lose their Mandate of Heaven.

The ancient Chinese believed that the earth, nature and the cosmos were part of a harmonious natural order, the Dao or path. Daoism, or Taoism, is the search for this right path. It forms the mystical 'ying' with the common sense of the Confucian 'yang'. The culture of the West understands Nature in terms of control and exploitation; for the Chinese it is the source of all harmony and balance. They thought it was our duty to understand this harmony through art and religion, to follow the flow of Nature.

Until AD 200, Chinese civilization developed in isolation from the rest of the world, perhaps because the Gobi desert separated them from the established civilizations to the West. Then The Silk Roads established commercial and spiritual contacts with Central Asia, India and Persia. Chinese spiritual culture never developed an elaborate theology and the idea of ​​a personal God is foreign to their thinking but Buddhism with its atheistic message and its care for rituals took root in China. It formed the third religious current of Chinese civilization along with Confucian wisdom and Taoist mysticism.

Beginning in the 600s, the Tang Dynasty (which had its capital in Sian, the largest city in that world,) sent scholars to India to collect authentic texts and relics of the Buddha. The Silk Roads brought a multitude of merchants of different percussions to the city: Muslims, Christians and Jews from Syria and Iraq, Zoriastrians from Iran and Central Asia, Persian dancers, Hindu fakirs ... Chinese Alexandria. The Tang dynasty ended in social unrest and revolution.

650 km east of Sian on the banks of the Yellow River is Kaifeng. In the 11th century it was the capital of the Song dynasty which lived a golden age. Their accomplishments ranged from technology and industry to art, poetry, and literature. Through the printing press they were able to disseminate their art throughout East Asia. Another characteristic of the Song civilization was the cult of the spirit. It relied on Confucian ideals of self-development and secular spirituality, turning them into an examination system with the aim of ensuring that only the best could aspire to positions of power. This philosophy would dominate East Asia for the next millennium and is the cultural basis for the success of modern states like Japan and Korea, still essentially Confucian.

Another great contribution of China to humanity was its cuisine. Like its medicine, Chinese cuisine is based on ancient theories of harmony, balance, the five senses, and ying and yang. It is a mark of civilization that the Chinese developed long before the Europeans to whom they exported their cooking know-how, first to Italy through Marco Polo and from there to France through Catarina de Medici.

The key concept of Chinese civilization has always been the search for harmony in all its manifestations. The path to this Confucian wisdom began with the magic of writing. But in the 15th century this view of the world began to change. Admiral Zheng He embarked on voyages of discovery in the 15th century. The fleet reached Cochine, in Kerala, southern India. It was a meeting point between West and East and a traditional port of commerce between India and China, exchanging black pepper and spices for porcelain and silk. From here Zheng explored East Africa, the Persian Gulf, and even Mecca itself. It would be a century before Vasco da Gama would enter the same territories. Chinese exploration may have changed the course of history but suddenly the Chinese imperial bureaucrats banned more travel and despite their rich potential in trade the ships were destroyed and their logbooks destroyed. It is one of the great mysteries of history. Was it due to a closed and ignorant mentality or a return to the origins: a look inwards seeking traditional harmony accepting the limitations on desires?

Now the Ming dynasty built a new capital in Beijing and reinforced the Great Wall against the Mongols. The change of course of the great Chinese civilization is kept in the manuscripts of the encyclopedia in the National Library in Beijing. There are 70,000 volumes on the past. Meanwhile Bacon, Newton and Descartes were studying not how to perfect the past but how to control the future.

Some Chinese intellectuals argued for a more open approach to knowledge. The Confucian texts were said to be guides for life but also historical texts. History should be a lesson for the future, not just a memory of the past. Indeed at the beginning of the 19th century China was about to come into contact with a culture whose view of history was diametrically opposed to its own. The Europeans were Judeo-Christians and they believed that history had a meaning and that it led to an end where they would be winners. As early as the 18th century, the South China Sea was frequented by Portuguese, Spanish, Dutch and British. They all had Chinese inventions on board - gunpowder, the rudder, the magnetic compass, paper maps, ink ... They settled in colonies where they traded goods, including illicit goods such as opium. This culminated in the Opium War in the 19th century. It was illegally trafficked from Canton because opium was banned in China. The British established a hellish trade triangle with opium from their colonies in Afghanistan and India traded in China for tea. But everything was paid for in British silver. This ruined not only the health of many Chinese but the Chinese economy itself. (It has a parallel in the triangle during the previous century of the slave trade between Europe, the Caribbean and Africa.) In the two opium wars the Chinese fleet was completely destroyed using, ironically, Chinese inventions.

After years of famine, internal wars and foreign domination in 1949 the communist revolution came to China. In the ancient Chinese book of divination there is a picture entitled Revolution. It says that in the event of a revolution you have to avoid 2 mistakes: rushing too much and using excessive force. What is done must correspond to a profound truth because a revolution that is not based on an inner truth will fail. The people will only endure what seems right in their hearts. This is the final meaning of the Mandate of Heaven.

Tianmen, symbol of the democratic revolution, was a government failure. We will see if Hong Kong is different.