The Harappa civilisation flourished in the Indus valley reaching a peak by the third millennium BC. Their territory extended to several thousand square kilometers, much larger than their contemporaries in Egypt and Mesopotamia. They developed a writing system and city sanitation unequalled until the Roman Empire. 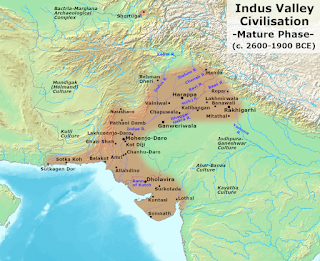 Yet, around 1900 BC their civilisation went into decline. The population migrated abandoning their cities. Researchers have attributed this to Aryan invasions from the north or interruptions in the monsoon cycles lasting 200 years making agriculture impossible. However other factors may have played a supporting role in the decline such as earthquakes or health problems.

The demise of ancient civilisations has long intrigued those who came after. Many collapsed because of over-exploitation or external factors like invasions, volcanic explosions, tsunamis and climate change. This story is about another natural cause, one which is affecting our way of life today: disease.

It is known that civilisation itself with its increasing urbanisation, migration to cities and close cultural contact has also presented new health challenges for humanity. Skeletal and molecular evidence has shown that tuberculosis was in wide circulation in South Asian populations for thousands of years. The degree of latency indicates its probable origin to the origin of urban life, which in Harappa is dated from 8000 BC.

In the Late Harappan times the skeletal remains studied show that both leprosy and tuberculosis had infected around 15% of the population. It was known that tuberculosis was present in Egypt since the fourth century BC and in India evidence of leprosy was found dating back to 2000 BC. This prompted research on disease in earlier times.

Researchers found that infectious diseases in the Harappa civilisation correlated with the changing levels of economic, social and environmental stresses. Leprosy had existed in a small proportion during the urban period, however post-urban times saw an increase in health risks. This is counter-intuitive since you might expect that extensive urban contact would worsen, not lessen, the risks of contracting infections. However it appears that during the urban phase the leprosy pathogen was fairly uncommon and that applies to infection in general which is measured at over 4%, a much lesser figure than the 15% of the post-urban era.

The explanation offered is that the deterioration of conditions in the cities after 1900 BC led to a massive depopulation. Those who remained suffered increased health problems and a more violent environment as seen in skeletal remains. This was probably due to weakening societal protection and more insanitary conditions in a degraded environment.

In conclusion the increase of health problems was not so much a cause of the Harappan society demise but rather a sign of its collapse. Does this tell us something about the present worldwide pandemia?

In the Valley of Mexico the Aztec society developed a civilisation between the 14th and 16th centuries. It followed preceding civilisations such as the Olmecs, Teotihuacan, Mayan and Toltec which had studied cosmology, agriculture, engineering, science, art and archaeology. The Spanish invasion of the Aztec empire in 1520 when a relatively small number of conquistadores defeated thousands of Moctezuma's warriors sounded its death knell. 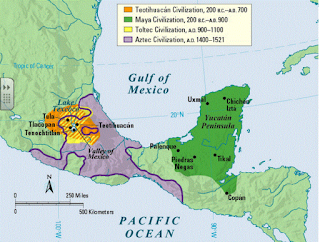 The Spaniards were better equipped using firearms and mounted on horses but their victory over such overwhelming odds is still surprising. Some writers have suggested that the Aztec belief that the Spaniards on horseback were gods contributed to their defeat. Poor military tactics and political division among the defenders are also put forward as reasons for their rout. However one element that played a central role in the conquest were the diseases the Spaniards brought to America, particularly smallpox.

Unlike the invaders the Aztecs had no immunity to diseases brought from Europe and Hernan Cortes' biographer, de Gomara, noted that the local population ate and slept close together so ensuring the rapid spread of infection creating an epidemic in Mesoamerica. This so debilitated the Aztec people that conquering them depended on tactics instead of force thus empowering the conquistadores and ensuring the collapse of the native civilisation.

There were outbreaks of other European diseases in Mesoamerica like typhus, malaria and measles but in 1545 and 1576 another type of pathogen assailed the Aztec civilisation. They called it cocolitzli and its symptoms were clearly distinguishable from smallpox according to the Mexican epidemiologist, Acuña-Soto. It has been surmised by molecular paleopathologists of the Max Planck Institute that this disease was in fact salmonella since the salmonella enterica bacteria has been found in the teeth of the cocolitzli victims. The disease may have been imported by the European invaders through their domesticated animals.

Dr. Stahle from the University of Kansas has shed light on the spread of the infection by analysing the dendrochronological data and concluding that during a drought period from 1570 to 1578 periodic rainfall attracted rodents to water supplies. These were most plentiful around the densely populated capital city Tenochtitlan. The rodents were carriers of the disease and spread the hemorrhagic fever, cocolitzli, to the Aztec community of which it is estimated that over 10 million died. Added to the smallpox infection a total of over 20 million Aztecs died from the pathogens.

Once again there is evidence here of a civilisation collapsing indirectly through a pandemic. Drought coupled with a European military invasion and diseases put an end to the powerful Aztec empire. Disease played a secret and insidious part in the collapse perhaps as the unseen enemy waiting in the background to take advantage of weakness. Is pandemia a biological sign that the civilisation itself is infirm?

The Justinianic Plague and The Black Death

The first wave of the plague that affected the Eastern remainder of the Roman Empire got the name Justinianic from the Roman emperor of Constantinople. It was a pan European epidemic that arose in Asia and moved across Europe between  541 and 750 A.D. There is dispute about the number of lives it took, some claiming over 20 million while others say this is highly exaggerated since there is little evidence. The pollen data shows that the plague had little impact on farming and cereal production which are measurements for the size and stability of population. Coins continued to circulate and no mass graves have been found. All that leads some researchers to conclude that the pandemic was much less lethal first time round than the 14th century Black Death plague which was caused by the same yersinia pestis bacterium. The assumption that both had the same devastating effect, however, is not supported by biological evidence.

As in previous epidemics the difference between the early wave and that of the Middle Ages may have its root in the growth of civilisation itself. Commerce established across Eurasia over The Silk Roads, especially the sea route, were probably the paths the virus followed in the 14th century. The Black Death originated in Central Asia and trade routes brought it to the Crimea by 1346, carried by the fleas of black rats on board ships.

However, the transmission mechanism was unknown to the population of Middle Ages Europe so they combatted it through other ineffective means. Doctors prescribed nosegays of aromatic plants, fundamentalists interpreted it as a punishment from God and flagellants whipped themselves. Pogroms against the Jewish minorities were organised because they were relatively untouched by the pathogen. In fact the Jewish community escaped infection because they had higher hygienic practices than their contemporaries. Ignorance had a hand not in stopping the pandemic but in spreading it. Is that a lesson for today?

The medieval plague, on the other hand, did not collapse civilisation in Europe but in fact led to adaptation and and economic change. A estimated 30% of the population was lost and this favoured the survivors. Increased social mobility meant that peasants could leave their holdings since land was plentiful and wages high. Due to the lack of a workforce labour saving technology led to higher productivity and a shift from growing labour intensive crops to husbanding animals. Serfdom gradually disappeared and the feudal system never recovered. However, civilisation did survive through the darwinian process of adaptive transformation. Maybe that offers hope for today's dire pandemic, if we are capable of adapting to the new circumstances.