The first civilization that we know of began in southern Iraq, the land later called by the Greeks 'Mesopotamia' (between two rivers). It was there in the delta of the Tigris and Euphrates that the Sumerians built a civilization in Neolithic times. 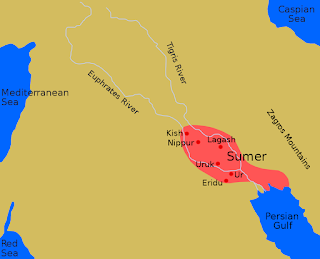 There were no precious metals in the soil but rather it was an area with abundant water and rich alluvial soil, ideal for cultivating and refining native grasses such as wheat and barley, as well as domesticating cows, sheep and pigs. (They possibly also discovered the fermentation of cereals because the word 'alcohol' is Mesopotamian.)

The Sumerians are of interest because they influence us even today. We share with them the great cultural  myths: Creation, the Flood, the Garden of Eden, the Tower of Babel.

The book of Genesis relates that the first cities were raised when God allowed the dry land to rise from the water. The Sumerian myth recounted that the first land rose from the sea where first a temple was built and then a city, an elevation called Eridu.

Today Eridu is a desert without inhabitants but originally it dominated a lake, source of real life in agricultural terms, (and later also a symbol of life itself). What the Bible calls Eden comes from the Sumerian word Adeem, the description of a fertile delta. Remains of a ziggurat were also found where the temple of the deesa Ishtar was located, which Genesis interprets as an apostasy. The biblical punishment is Babel, the confusion of languages ​​that prevents the cooperation necessary for the construction of new ziggurats.

Archaeologists have revealed the huge expanse of the Eridu site with 6-mile circular walls built towards the end of a great economic expansion that saw thousands of people moving from the countryside to the city. The surrounding terrain, today a salty plain, must have produced as many grains as the modern American Midwest to support such a population. Here the art of pottery, astronomy, the first school and literature, the first map of the world and even the division of time and space into multiples of 60 were invented. (When we look at a modern clock it reminds us of the debt we owe to the Sumerians.)

However all this work was destined to die of success. More and more intense cultivation to feed a growing population devastated the soil. It was the first time that humanity discovered the destructive effects of civilization. The first civilization failed to balance the fertility of the earth with human voracity.

Iraqis have a long tradition of stories, such as 'Arabian Nights', and boast the world's first literary work, 'Gilgamesh', with its original story of the great flood and the ark, inspiration for the myth of Noah. This heroic legend also served as a model for the stories of extraordinary human explorations such as the Odyssey, the Holy Grail, and modern-day Star Wars and Indiana Jones. It is a double irony that the tale of Gilgamesh's quest for the secret of eternal life has come down to us through writing, invented here.

About the year 2000 before our era, agricultural ruin was apparent in Sumer with the consequent famines and the collapse of the economy. Enemies from Iran invaded the Sumerian lands and caused the population to flee. (We see it repeated today with the western invasion of Iraq in search of oil and the economic chaos it caused.)

Among the migrants from the delta there was a certain Abraham, an inhabitant, according to the Bible, of Ur of the Chaldees. In 1862 the archaeologist Henry Rawlinson identified Ur with a city in southern Iraq. In the early 1920s Leonard Woolley excavated the site and identified it as a Sumerian city. Abran, the son of an idol maker, fled with the rest of the Sumerian migrants and brought with him a conclusion learned from the ruin of Sumerian civilization: the ancient gods had failed them. His new idea was simple and powerful: there is only one God. He took his monotheism with him on his flight to Palestine. It was an idea that would mark the three great creeds of the Middle East that recognize Abraham: Judaism, Christianity and Islam. 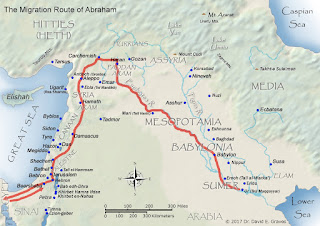 There are a plethora of sects surviving in Iraq after the Arab conquest in the 8th century AD. which saw the division between the invaders from the North, Sunnis, and the original delta, Shiites. The Mandeans in the south maintain the tradition of calling themselves followers of John the Baptist. They still practice baptismal rites in the Tigris River. These practices are reminiscences of Jesus' immersion in the Jordan and are perhaps related to it in the same way as the belief in monotheism: by migration.

The Islamic conquerors created in Baghdad an immensely rich cultural and economic civilization. They built universities long before Oxford or the Sorbonne. The researchers who taught here translated the sacred texts of the Jews and Christians to better understand divine decisions. They also kept here the Greek legacy of science and philosophy and the Mesopotamian tradition in astronomy and mathematics. All this ended when the Mongols invaded in 1258. The lands to the south were deserted and Baghdad with its irrigation canals, sources of life, was destroyed.

We citizens of the 21st century can still recognize our psychology in the mythology of the first city people in Mesopotamia. Can we also recognize our future in the Iraqi desert, the result of overexploitation?