It was on the Aegean islands near the Anatolian coast that a new Greek vision began which has shaped European thought.

Greek culture had traditionally conceived of humans as puppets in the hands of the gods. After the invasion of the Aegean islands by the Persians in 547 BC, philosophers, probably heavily influenced by Persian ideas, began to speculate on the composition of the universe, the geometry of nature, the role of humanity and the existence of the gods. The new view was that humans were independent of the gods and could project their world without them. 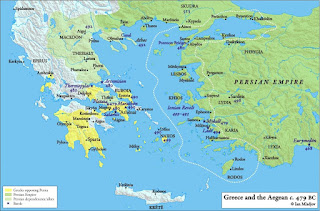 On these islands were born the scientific ideas that established the foundations of our western vision of the universe. Enriched by their contacts in the Persian empire, the Greek micro-states began to investigate the physical structure of their 'Cosmos' and established a human vision of nature. They looked for the essence of nature as a cosmic explanation. On the island of Miletus, Thales pronounced that it was water; his disciple Anaxímedes declared that the essence was air; from the island of Samos Pythagoras argued that numbers were the essential; Heraclitus in Ephesus considered the nature of the universe to be fire. These ideas marked the beginning of humanity's understanding of nature and its domination over it.

The epoch was the middle of the first millennium BC, the Age of the Axis: Confucius in China, Buddha in India, the grammarians and philosophers in India, Zoroastrianism in Persia, the Hebrew prophets in Israel, and the Presocratics in Greece. Europe copied ideas from Asia and Africa to build its own civilization. It was the first time that it had participated in the civilizing movement.

From Samos it is easy to understand why the ideas came from the East: it is an intermediate point on the Eurasian continent. In fact the word 'Asia in ancient Greek meant Anatolian, the Turkish coast visible from the island. There began the geography of the lands of the civilizations of the Fertile Crescent, Iran, India and China.

The Pythagorean concepts emanating from Samos had Asian sources such as Babylonian astronomy and mathematics and Indian ideas about reincarnation. In fact archeology has discovered a Babylonian tablet written in cuneiform and classified as Plimpton 322 that describes trigonometric calculations a millennium before the Pythagoreans. We owe it to the Pythagoreans for bringing this knowledge west to modern Italy.

The Greeks also shared the belief of other civilizations that the universe formed a harmonic unit, what they called Cosmos. This was an original idea because it involved the concept of a universe as a system that could be analyzed and understood.

Another original Greek contribution was their belief that human beings are political by nature and that they built their civilization on the 'polis', the city. This new rational vision was also the catalyst, in Athens, of a political evolution in civilization: democracy.

For the Greeks the essential quality of civilized life was humanism: the human is the measure of all things and fulfilling the potential of the individual was the goal of civilization. Freedom and destiny are the themes of their art. They also understood that civilization is fragile and that maintaining an open society is difficult because irrationality constantly threatens to erupt in human affairs.

In the fourth century BC A disciple of Aristotle, Alexander the Great, invaded the Middle East and later the Nile Valley. He followed the Persian routes to take Babylon and through the Kyber pass into India. His successors in the second century penetrated to the Ganges valley and entered Varanasi. This was the first time the West had ventured out into the world.

However, the Greek invasions also helped keep open the trade routes already established by the Persians in central Asia and connecting Europe to the East. The Greeks and Romans sailed across the Indian Ocean to trade in species. They were the first signs of global trade.

The Romans united the Mediterranean by the sword and their empire stretched from Hadrian's Wall in Scotland to the Gulf of Persia. But the difference with India and China was a lack of social, religious or ethical cohesion. In the 5th century with the collapse of the Roman Empire, Europe entered a great economic, social and religious crisis. The void was filled with various cults, one from Egyptian Christianity: the monastery. Christianity had become the official religion of the Roman Empire in the 4th century and thus its beliefs, myths and taboos were established in the West. They were inherited from the Iron Age peoples in Palestine and later from the Bronze Age cities in Iraq.

The first great history of the Western Christian tradition was written in north-east England in the 8th century. It was at the monastery of St Peter and Paul at Jarrow, near Newcastle. Its author was a monk named Bede who established the Anno Domini system for historical dates.The books written here give clues to the vision of his time. David, the biblical hero was the model of the rulers of the time and they perceived him as a Teacher, an educator of his people. He was the psalmist and recalls the great Western tradition of social legislation and welfare. But there is also a drawing of David, spear in hand, waging just wars against non-believers. If we put the two ideas of the hero together, we have the ideal Western ruler from the Crusades to the Gulf War.

The history written by Bede showed how Western peoples were transformed during the High Middle Ages through Christian, Mediterranean and Latin civilisation. These historical books, within a poor country full of barbarian Anglo-Saxon immigrants, show us the key elements from which the culture would come: Judeo-Christian religion and ethics, Greco-Roman humanism and law, and Germanic society and language. In the hands of a historian like Bede, that mix formed the basis for a powerful narrative: the barbarian peoples of the West were the Christian heirs of the Roman Empire and were destined to carry history from the human city to the city of God. The Judeo-Christian idea that history is eschatological, that it makes sense and leads to an end, is a theme of Western culture from St. Augustine to Karl Marx. Between the 11th and 13th centuries the barbarians reached adulthood and created an age of magnificent art and architecture, expressions of the distinctive Western soul.

One of the most intriguing questions remains how Westerners came to dominate the world over such advanced civilizations as India and China. One factor that aided development was, from the 12th century on, an increasing number of late marriages and small nuclear families, which was not achieved in China until the legal imposition of Mao. This was key in the accumulation of wealth because it ensured inheritances and properties. Added to this was a possessive and individualistic landlord culture and a free market philosophy. It was the beginning of the divergence between Western civilization and those that preceded it. Individualism as a value replaces the traditional collectivism of ancient civilizations. It is an original Western ideology and is at the base of our concept of freedom based on property. It is the seed of Western ideology that, through the British, French and American revolutions, became predominant in the world.

Meanwhile the great resources of Western civilization kept their roots in the Fertile Crescent. Muslims had inherited the legacy of the Ancients and it was in medieval Baghdad that the first great attempt was made to build bridges between civilizations. Through its universities and libraries, Babylonian astronomy, Hindu mathematics, and Chinese science were transmitted to Europe by Arab humanists who also worked in Sicily and Toledo.

In 1492 the event that changed the course of Western history occurred. The conquest of the New World gave enormous resources to the invaders. Columbus wrote to Queen Elizabeth that civilization would bring light to the natives in its darkness and gold to the conquerors that would allow them to do what they wanted.

A key figure in the new knowledge was Francis Bacon because he perceived how science and technology would be used in the future to subjugate other peoples and conquer nature itself. From then on, Bacon said, the supreme value would not be measured in moral or religious terms but in utility. The truth would be the utility, and vice versa. Humanity would make its own laws and would no longer depend on God.

The city changed again due to the industrial revolution that gave an opportunity to small-scale societies in northern Europe. Until then, technological advances had come from Asia, but now the West took a leap into the future. Their populations migrated from the countryside to the city in a few generations. Industrial civilization was born. Now this phenomenon is found all over the world but it started in Manchester where the great buildings such as the City Hall have representative statues of the new civilization: they are not poets or gods but men of science and technology. Prudence and hard work were the ideals of the new age and through the British Empire trade united the ancient civilizations under manufacturing capitalism.

The first great cities of the Indian, Middle Eastern and Chinese civilizations had been sacred spaces but these new cities were places where people worked hard to make money. Their builders, the British Victorians, were optimistic about the city's role as a force for liberation and order in human affairs.

The modern leading Western state has built its capital, Washington, with buildings in the Egyptian, Roman and Greek tradition. They proclaim that the USA is the heir to the legacy of ancient civilizations. The ideals of the new empire are read in marble. The Lincoln Memorial, modeled on the Parthenon in Athens, commemorates a leader who, in the midst of a brutal civil war, upheld the values ​​of the Enlightenment, the belief that we are all born equal with the right to freedom and happiness.

Today with the expansion of communication technologies we live in a global village. The values ​​of liberal capitalist democracy seem unrivaled. However, in the West there is a growing feeling that our way of life no longer has moral or practical support because it produces pollution, ecological destruction and exploitation of the very life of the planet.

The question for the next generation is: can values ​​such as individualism, consumption and competitiveness, Western values, guarantee the continued health of the planet alone? At this moment when the West is in its moment of triumph it seems that it has reached the point of many previous civilizations: choosing between transforming by learning from others, or dying.

At the origins of civilization 5,000 years ago, today we see a desert caused by an ecological disaster. The founders of this civilization tell a myth about their foundation. They say it was a diabolical deal because it offered the joys of life, the arts, sex, justice, and the noble ideals of humanity; however it also brought destruction, violence, cruelty and fear. The Sumerian god of wisdom said that all this was civilization and that if you want its benefits you have to accept all its qualities and use them with self-control and wisdom.