The first civilization on the African continent, which we can date to around 3000 BC, began on the banks of a river like those of Iraq, India and China. It formed the southwestern part of the Fertile Crescent, a semicircular extension that extended from the delta of the Tigris and Euphrates, land of the Sumerians, to upper Egypt in the Nile valley. Archeology has uncovered the ideals and beliefs implicit in the myths of Egyptian civilization, some of which remain today. 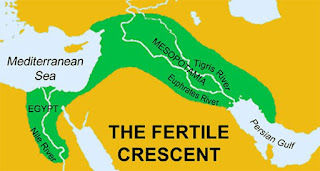 The Nile flows about a thousand kilometers between dunes and cliffs with an average width of 9 km. It is a spectacular geography to behold: a blue loop that flows between golden sands and narrow green meadows, dominated by a bright sun. But what's more, the river shaped a civilization.

The Sumerian spirit, sunk in its land of marshes, was pessimistic; Egyptian culture was optimistic and confident, cyclically inundated by the fertile contribution of the river. This climate balance and agrarian abundance in Egypt sparked hope and a belief in the permanence and stability of the world.

Their civilization had a cultural prehistory in the Upper Nile Valley where many smallholder communities created irrigation systems to sustain their crops with the help of the so-called 'black earth' from the annual floods. About the year 3000 B.C. These scattered cultivators were unified into a single state, the first in history.

The data on the beginnings of the Egyptian civilization began to be known in 1897 when the British archaeologist Greene went in search of its origins. In upper Egypt he found the altar of a local deity named Horus the falcon. Around the same time, other researchers found a plaque made there showing King Narmer, the legendary founder of the new state. He wears the crown of Upper Egypt and is beheading the king of the delta. It is the snapshot of the unification of the country.

A year later Greene discovered in the same area a 3 meter high round rise of white sand lined by a sloping layer of sandstone. The archaeologist interpreted this construction as the symbolic representation of the place of Creation when the first island appeared from the seas of chaos. (The Sumerian Creation myth also said that the first terra firme arose from the sea at an elevation called Eridu. Similarly, in the text of Genesis 1/9-10 the writer of the P(priestly) tradition recounts that God made land appear from the primordial waters and gave them the names of 'land' and 'seas' and blessed their creation.)

In Egyptian mythology, the falcon Horus was the first living being to land on this island emerged from the seas and from then on in every Egyptian temple the same scene was drawn: an elevation with a reed altar that surrounded a perch for the falcon. It was a reminder to every Egyptian believer not only of the time of Creation but of the origin of their civilization - a society founded on an organization of divine royalty and which would remain stable as long as traditional rituals were repeated. Indeed, it remained unchanged until the conquest of Egypt by Alexander the Great some 2,700 years later.

For the Egyptians, divine royalty was the guarantee of a stable cosmos. This same idea of ​​the divine right of royalty was accepted centuries later by European cultures. (In Shakespeare's 'Macbeth' the English mentality of the 1600s perceived the murder of the king as provoking a cosmic natural disorder. It was not until the 17th century that the divine right of the king was questioned in the United Kingdom and this led to a civil war It took the revolution of the 18th century in France to end the same idea.)

The first Egyptian kings were buried at Abydos in palatial mortuary temples. Later the Horus kings descended from Upper Egypt to the Nile delta and built their royal city, Memphis, and their tombs. Thus the ideology of the first world state was summarized in three concepts: central power, royal rituals and the cult of the dead.

Today we can see the pyramids as equivalent to the artificial elevations of other cultures such as the Persian, Mayan or Aztec that showed their power by creating great public symbols. In Egypt the dead king had the status of a manifestation of the Sun King himself. (It is remarkable that as late as the seventeenth century Louis XIV, who built the Palace of Versailles, was regarded as 'the sun king' in France.)

Through irrigation and agriculture a standard of living could be provided for all Egyptian subjects, in exchange for spending the huge surpluses on tombs and palaces. The pharaoh was deified because he represented the unity of the earthly and divine kingdoms, and therefore the stability of the cosmos. He was the (magical) head of the Nile flood cycle without which life in Egypt would have been impossible.
The myth of the sacralization of power where authority is handed over to one person by the majority is an Egyptian cultural legacy that lasts until today. Kings, Popes, and Presidents have a special aura and inhabit grandiose buildings to express their authority. They also have a responsibility to ensure stability in an uncertain world.

In Egypt the ties that united the people with the state were economic and religious and the great event in their religious lives was the pilgrimage to Abydos where it all began. There the resurrection of Osiris, king of the dead, was celebrated. Like the Hindus to Varanasi, the Shiite Muslims to Karbala, or the Christians to the Jehoshaphat valley, the ancient Egyptians wanted to be buried in Abydos. All of these faiths share the belief in an eternal spirit, a final judgment, and resurrection after death.

Also found in the temple of Abydos is the pictorial illustration of the divine Mother, Isis, with King Seti on her knees. (A similar scene is seen in the Romanesque and Gothic Christian sculptures: the child on the virgin's lap.)

However, contrary to Christianity, there is no conception of hell in Egypt because it does not fit into their optimistic religious vision.

In 332 BC Alexander the Great conquered Egypt and civilization turned to the sea and its new capital Alexandria, a city enriched by the merchants of the Sea Routes of the Silk Road, a new paradise, this time hedonistic.

However, the old faith was not completely lost. On the eve of the full moon in March, just before the summer heat, thousands of Egyptians descend on the small town of Luxor in Middle Egypt to celebrate the annual festival of spring when the Nile rises and there are 40 days of mourning for the dead. It is an ecumenical festival and Muslims celebrate it in a mosque within a large pagan Egyptian temple. Coptic Christians also participate because in the past they had a church within the same temple. It is a festival that reflects the culture of Upper Egypt, the place where it all began, and shows that the traditions are still alive.

Today in Lower Egypt, even with its delta Greek culture, there are also places, like the University of Cairo, that investigate the original culture of Egypt. They remember that the goal of civilization is a cooperative and stable life, which operates cyclically with growth and decline, and that creating roots is its distinctive habit. It is the summary of the civilizing thought of the pharaohs who built the first world state with a stability that was maintained for almost 3,000 years.