Zartosht (Persian) or Zoroaster (Greek) or Zarathustra (Western), was an Iranian prophet. His dates of life are disputed and some date him in the second millennium BC. while others as a contemporary of Cyrus of Persia in the first millennium, the Axial Age.

Before Zarathustra the ancient Persians worshiped the gods of the Irano-Aryan religion. The Zoroastrians introduced monotheism and worshiped only one God: Ahura Mazda. This divided the Irano-Aryans from the Indo-Aryans who later created Hinduism. When Cyrus the Great established the Persian Empire (580 BC), Zoroastrianism became the imperial religion. 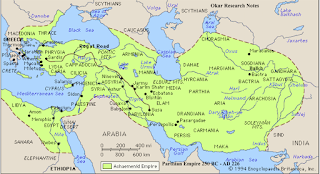 There are multiple similarities between Zoroastrianism and Christianity that can be seen in their holy books: the Bible and the Avestas. The most notable parallels are in their theologies, eschatologies, and anthropologies.

In theology the most striking similarity is monotheism, common to both religions. It is curious to note that Abran, who, according to biblical texts, was an inhabitant of Ur of the Chaldeans, possibly left this city after its agricultural production declined due to the salinity of the soil. Ur was incorporated by the Persians in 540 BC. with the consequent influence of their Zoroastrian religion and monotheism. Abran migrated north with the other inhabitants and may have ended up in Palestine. At that time the Jews were returning from Babylon, freed by Cyrus, to rebuild the temple in Jerusalem. All these migrants had been exposed to the idea of ​​monotheism preached by the prophets of the exile. The Babylonian experience and the Abrahamic tradition perhaps connected in the acceptance of monotheism. Judaism, Christianity, and Mohammedanism adopted an Abramic and monotheistic faith, possibly influenced by the Zoroastrian precursor.

Both traditions consider God as infinite and immaterial. They also agree that in His essence there are multitudes of people, that is to say multipersonalism and unity simultaneously . (Islam and Judaism differ in that their God is a monopersonality.) Zoroastrians recognize up to 7 independent immortals as part of Ahura Mazda. There is a certain similarity here to the Christian triune God and even to the belief in angels and other metaphysical beings. Both Gods are also Creators of the world, omnipresent and personal.

However, Christianity does not believe in the duality of good and evil like Zoroastrianism. Lucifer was created by God and chose evil; The Zoroastrians believe in a struggle between the equals of two metaphysical entities: the good Ahura Mazda and the Lie, Angra Mainyu and his hosts.

In anthropology the two traditions admit a state of struggle between good and evil and the free will of humans to choose one or the other. They are responsible for their actions and will be held accountable for their moral decisions. However, the bad decision is seen by the Zoroastrians as a mistake, not a willful and conscious sin as in Christianity. Zoroastrian salvation is achieved by weighing good works and errors in the balance. Salvation is gained by piling up more credits for good thoughts, words, and actions than mistakes. Christianity, on the other hand, perceives sin as the transgression of divine laws. The Christian is guilty of sinning and must work from there to save himself.

The two religions are eschatological because they focus on the future and the end of all things. Both perceive death as a step to a different life. Last judgment, retribution, resurrection, heaven and hell are an integral part of this eschatological basis.

When the Zoroaster's soul dies, it goes up accompanied by the guardian angel and finds a 'daena' in feminine form and whose beauty or ugliness reflects the balance of good and bad acted out by the person in his life. The judgment is executed on the 'separating bridge' that leads to paradise (originally a Persian word: pairaidaēza meaning ´walled garden'). If one has done well in thought, deed and word, the bridge widens and it is possible to cross; otherwise it narrows and the walker falls to hell. Upon entering paradise the soul passes the barrier to eternal happiness and hopes to reunite with the body on the great day of resurrection.

The Christian transition from death is similar. Paul describes how this is a step to immortality awaiting the final arrival of Christ at the end of time. There is also an intermediary judgment decided not by a balance but by an omniscient God. (Rom. 2/6) Eternal punishment awaits those who do not enter paradise (Matthew 25/46).

The final judgment with retribution appears in both beliefs. For Zoroastrianism Ahura Mazda will finally triumph over those of the Lie, Angra Mainyu and their hosts. (Yasna 8/30).
The Christian ending echoes these concepts but related differently. It begins with the second arrival of Christ and the judgment of God, all without warning and with fire and destruction (2 Peter 3/10). It ends with the promise of a new earth and heaven, The New Jerusalem.

Anthropology finds the eschatology of both faiths in the resurrection. Zoroastrians believe that they will receive their body again (Bundahishn 6/30, 10). This literal resurrection creates an environment of holiness regarding the corpses in the Zoroastrian community. Christians have the resurrection of Jesus as the basis of their message (the kerygma). It is the model for the future resurrection of all mortals. If not, according to Paul, his testimony would be false (1 Corinthians 15/15).

The parallels between the two religions exist in their theology, anthropology, and eschatology. However they differ in Zoroastrian polytheism and dualism and in their basis of salvation by good works.