The civilization that probably most influenced Western culture was the Persian. It measured some 4,000 km from east to west and incorporated 3 of the previous major civilizations: Sumer, Egypt and India, plus a part of Greece. The Persian empire had a cultural and religious dominance (through Zoroastrianism). It defined the ideas of the second part of the first millennium (The Axial Age) and influenced the dawn of the Greek and Judeo-Christian traditions. 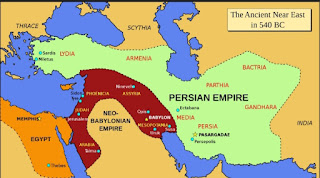 The religious capital of the Persian civilization was called Parsa. (Persepolis is the name in Greek.) It was built 2,500 years ago and, as the ceremonial capital of the largest Empirek of its time, it was also the richest city in the world. We know little about the Persians from their own hand. Much of the data that has reached us is from their invaders, the Greeks.

Cyrus, a tribal leader of the nomads living on the Persian plain, gathered an army and set out in 550 BC. on the conquest of territories. Within 30 years he controlled the beginnings of an empire that would stretch from the Indus in the east to Macedonia in the west and included Egypt and Ethiopia. That is to say, it collected, geographically, the preceding civilizations of the Indians, Sumerians and Egyptians. It had several capitals, depending on the seasons of the year: Babylon, Susa, Ecbatana and Persepolis. The latter was built by Darius around 515 BC.

In the 1930s archaeologists rediscovered Persepolis that had been buried under the sand for two thousand years. Among triumphal staircases and wall sculptures they found some 30,000 clay fragments with inscriptions in cuneiform, the ancient Persian script. They are invoices for payments to the workers of the Empire. From them can be deduced the materials that decorated the buildings: cedar for the roofs and golden doors. It was an imposing yet harmonious ensemble with a clear purpose. As can be deduced from the reliefs sculpted on its stone walls, the function of Parsa was to receive gifts from the different peoples of the empire in a ritual. It was not a military capital but primarily a symbolic and ceremonial place that represented the heart of the empire and where its people showed their loyalty to the king.

The Greeks have left us an image of violent Persians who ruled with an iron fist. However, the Persepolis reliefs tell a different story. They teach a culture of peace and harmony, without scenes of battle or violence. The inscriptions show declarations of peace, not war. The peoples of the empire were free to practice their customs and religions. The biblical book of Ezra offers an independent perspective on this. In the first chapter he praises the Persians under Cyrus the Great for freeing the Jews from slavery and allowing them freedom of worship. (In 538 BC. Cyrus freed the Hebrews from captivity in Babylon and granted them semi-autonomous status in Palestine. Perhaps for political reasons: as a buffer state against the Egyptians.) Still, the Persian superpower is unique in the ancient world for its liberal regime. Its motto could have been: pay your tributes and follow your beliefs. In this way the multicultural empire was able to last 250 years.

However, an area measuring 4000 km from east to west is not governed with tolerance alone. A network of road communications ensured that the central power were kept informed about the empire. The famous Persian Royal Road, which later became part of the Silk Road, stretched from Persepolis to Souza, with a detour to Babylon, then 1,500 km west to Ephesus on the Meditarranean, east to India and south to Egypt. (Ironically the conquest of Persia by Alexander the Great was facilitated by this road network.)

The information from different parts of the empire was brought to the rulers by a 'pony express' system that used horsemen and posts, as we read in Herodotus. These stops, guarded by Persian soldiers, also served as safe havens for merchants and travelers. This facilitated the exchange of goods and ideas throughout the empire.

In 334 BC Alexander the Great invaded the Persian Empire and, using superior military tactics, won battles until he reached the heart of the empire, Persepolis. As a ceremonial place, the city did not have military forces to defend it, so the capture was easy. In an act of vandalism Alexander decided to destroy it, perhaps to annihilate his enemy symbolically, or perhaps simply because the Greek invaders were the hooligans of antiquity. (Irony: it was the Greeks who invented the word 'barbarians' to designate anyone who did not speak their language.)

Fortunately the destruction of Persepolis by fire protected the city under a layer of ash for 2,000 years. Thus, when archaeologists excavated it in the 1930s, they found ruins with reliefs and intact clay tablets. That is why we know that future civilizations, such as the Greeks, copied the formal Persian gardens, their ceremonial architecture and their sense of luxury.

Perhaps the greatest Persian feat was the empire itself, the first global superpower in history, based on respect and tolerance for other cultures. Few imperial countries since then have reached their level.