In their books Davidson & Rees-Mogg assert that there are four variables involved in great social change: "topography, climate, microbes, and technology." This blog entry analyses one of the variables in the demise of some of the most famous empires: climatology.

Around the year 2200 B.C. there occurred a period of drought in the Middle East and it lasted on and off for about 300 years. Water levels dropped in the Red Sea and Dead Sea due to higher evaporation. The marine sediment cores from that time also reveal an increase in environmental dust.

Mesopotamian settlements were abandoned at the time according to archaeological finds in Syria and there was a general depopulation of the area. Ur, the Sumerian capital city, was sacked by marauding nomads causing more migration. It has been suggested that Abraham was among those who migrated north during this period.

Sargon of Akkad united the city-states of Sumer around 2400 BC to establish later the Akkadian Empire (2340-2384 BC). 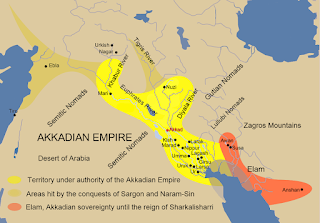 Weiss and others have published data suggesting that the breadbasket northern area of the Akkadian Empire suffered a prolonged drought due to a volcanic eruption circa 2200 BC. This evidence coincides with the collapse of the empire. 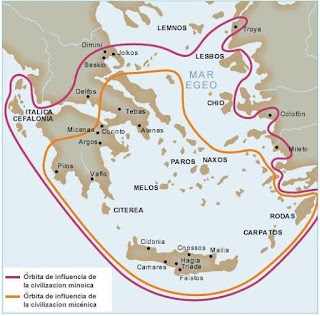 The Bronze Age culture centred in Crete came to a sudden end around 1600 BC. This has been attributed, at least in part, to the eruption of the Santorini/Thera volcano which caused a tsunami and threw up huge quantities of sulphur dioxide. This may have lowered the average temperature by one or two degrees in Eurasia and North America. It would also have caused cold, wet summers and ruined harvests. (As a guide the average drop of 1°C reduces plant growing time by about a month and lowers fertile ground by 150 metres. A drop of 2°C would of course lessen the time and area for planting.)

Whatever the other causes of the demise of the Minoan culture it is known that the Santorini/Thera volcanic eruption marked the beginning of a 50 year decline in their civilisation, at which point mainland Greeks took over Crete.

During the Late Bronze Age there was a long drought around 1200 BC which may have led to the collapse of several cultures on the shores of the Eastern Mediterranean. Among them were The Hittite Empire, the Egypt of the pharaohs, the Mycenaeans based on Cyprus and the Syrian coastal towns. They were finally replaced by the territorial kingdoms of the Iron Age, including Israel and Judah.

After the Minoans the next group of people that dominated this part of the Mediterranean was the Mycenaean culture, the Late Bronze Age inhabitants of Mycenae in the Peloponnese (1450 - 1100). They came into conflict with the Early Iron Age Anatolian Hittites who forged their instruments of war in that metal.

Around 1250 B.C. surface temperaturas cooled in the Easter Mediterranean sea. This reduced rainfall and a drought began in Cyprus and Syria which lasted a minimum of one and a half centuries and possibly up to four hundred years. Famine, possibly disease and invasions by migrant 'sea peoples' followed.

The Mycenaens came into confrontation with The Hittite Empire which flourished at the beginning of the Iron Age. Their use of this metal to make weapons of war ensured supremacy against those who relied on bronze to defend themselves.

However the Hittites succumbed to the same climatic changes that had affected the Mycenaens. Study of the pollen grains from the Dead Sea area show that dry-climate trees were being cultivated between the end of the Bronze Age and beginning of the Iron Age. Modern Anatolia, where the Hittite empire, lay also offers evidence of pollen data indicating drought. Indeed there was famine in the land from 1250 BC. as a plea letter from the Hittite queen to the Egyptian King Ramses II states because the Hittites were importing grain from Egypt.
The Egyptians and the Hittites had been at war previous to the megadrought of  the 13th century but  Egypt had worked to anticipate the crisis and plan for food shortages. In order to maintain stable borders during the crisis they opted to supply their former Hittite enemies with grain. They coped with the drought by increasing the grain crop in the greener areas in order to supply the arid zones with food. Researchers have found that Egypt also crossbred cattle to make them more heat resistant for plowing. In this way they managed to extend the lifetime of the empire for 2 generations. However the Late Bronze Age Egyptian Empire collapsed like the other nations around them in a domino fall during the megadrought which began in 1250 BC.

This area of the Middle East is prone to dramatic climatic changes which affect the politics of the region. The Neo-Assyrian empire expanded during unusually wet conditions between 850 and 750 BC. However its collapse came about under a long drought between 675 and 550 BC.

Today it has been suggested that the present-day civil war in Syria has come about in part due to a drought worsened by a general climate change. NASA has published that since 1998 the whole region has experienced its most severe drought ever.

However, the scale of climate change in the Late Bronze Age was not confined to the Eastern Mediterranean. It also affected sites as far away as the Indus valley civilisation. The evidence partly comes from measurements of the depth of the lake Kotla Dahar in Haranya revealing accelerated evaporation. This indicated that 4,100 years ago the summer monsoons weakened across India for a period of 200 years. 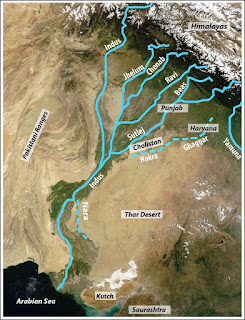 Measurements on the ancient lake mentioned consisted of analysing the shells of the water snail melanoides tuberculata from the sediments. The changes in oxygen isotope ratios over a period of thousands of years told the researchers a story of a deep lake that became a shallower one, as evaporation accelerated and water supplies dwindled and then all but disappeared, with an abrupt weakening of the monsoons that lasted around 200 years.

In the same century as the other megadroughts the intermittence of heavy then no monsoon rains brought the Khmer Empire in Angkor Wat to its end. It was named 'hydraulic city' because its sophisticated water system made of huge water tanks connected to canals. This total dependence on monsoon rainful may have been its nemesis. 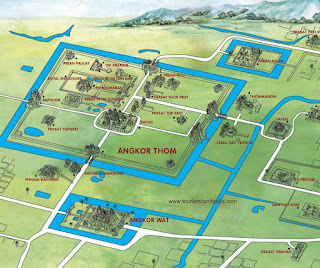 Buckley, a tree ring specialist from Colombia University, researching trees in Southeast Asia found that some years the rings were thicker indicating storage of nutrients and other years much thinner showing drought. Trees that were 1,000 years old held evidence of prolonged years of drought which corresponded to the collapse of Angkor. The Khmer dependence on the monsoons for water was a factor in their rise and also in their fall.

One of the many reasons for the rise then the fall of the Roman Empire was the prevailing climate. When the empire was rising warm, wet weather within a stable climate helped productivity in a society living on agriculture. This also ensured political stability. 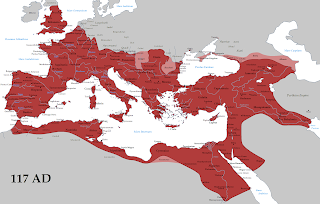 However, just when the empire was threatened by Germanic tribes in the West and Persians in the East the climate changed. It was during the reign of Justinian (6th century AD). Ice core research indicates an huge amount of unusual volcanic activity in the 530s and 540s in the Northern Hemisphere. In 539/40 there was a tropical volcano eruption. This led to the Little Ice Age which resulted in a year without a summer, 536, and only dim sunlight for 15 months. 536 to 545 was the coolest decade in two milenia and a saw a fall in European temperatures of 2.5º C. These cold temperatures persisted for 150 years in the Northern Hemisphere. Disease in the form of the bubonic plague also appeared in 541. The combination of climate change and the plague were pivotal elements in the collapse of the Empire.

The Mayans who flourished in the Yucatan peninsula also saw the rise and demise of their civilisation in wet and dry climatic conditions.

Douglas Kennett of Pennsylvania State University confirms in his research that there were long drought periods which had been predicted by earlier studies. He shows evidence for the start of these drying trends between 640 and 1020 AD.

The Early Classic Mayan expansion coincided with high rainfall levels between 400 and 500 AD. These filled the natural underground limestone caves(called 'cenotes' from the Mayan word meaning 'well') with enough water to sustain the growth of centres like Tikal, Tulum and Chichen Itza(sacred cenote).These water-filled caves were sacralised and there Tchac, the raingod, received offerings of  gold and humans.

The drought between 820 and 870 matches the Terminal Classical period which ended in depopulation and political power moving to the north of the Yucatan. These northern cities recovered since they were accostomed to dryer climate conditions but the southern cities which relied heavily on annual rainfall for crops never did.

The research team bases their conclusions in the analysis of hydrogen and carbon isotopes in leaf waxes from two lake sediment cores in Mexico’s northern Yucatan region and in Guatemala. The hydrogen isotopes enabled the team to study drought and precipitation amounts, while the carbon isotope signatures provided insights into agricultural methods.

Research also shows that the Mayans attempted to adapt to climate changes through a different production of their mainstay, maize. They stopped a slash and burn technique and adopted a more concentrated production system. However this only worked up to a point.

The rise and fall of the civilisations mentioned here coincided not only with with climate changes but with several other factors (estimated to be up to 200 in the case of the Romans). However, since they were all communities based on agriculture the climate swings affected their food sources. Depopulation, disease, migration and famine all had their origin in lack of food so in this sense the climate dictated their way of life and its end.